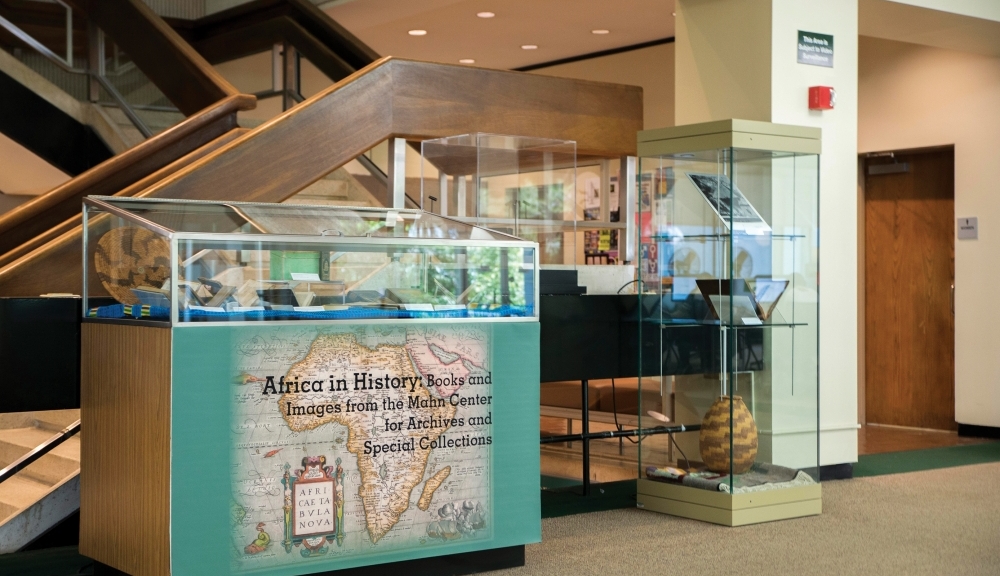 In Southeast Ohio, Africa might seem far away, floating somewhere beyond an ocean that also escapes Appalachia’s horizon.

But in reality, the continent is closer to Ohio University than one might imagine.

In late July, Alden Library debuted its new fourth floor exhibit titled “Africa In History” that aims to showcase the institution’s collection of 19th century literature that chronicles the distant land. These dated bindings of yesteryear — the main focus of the exhibit — consist mainly of travel books complete with olden maps, explorers’ material, children’s books about Africa from the period and an array of other works.

“We try to represent different parts of the collection,” Miriam Intrator, Alden’s special collections librarian, said. “We have a textbook in (the exhibit) because it’s always interesting to see what children are being taught.”

The textbook and similar material are examples of Anglo-American works depicting Africa rather than Africa representing itself, Intrator said.

She stressed the visual components of the exhibit which also include baskets, hand-drawn African animals, photographs and other elements stemming from the continent itself.

Tebelelo Mazile Seretse, the former ambassador of the Botswana embassy in Washington D.C., donated several of these non-literary pieces to the display, Araba Dawson-Andoh, an Africana librarian at Alden who helped create the exhibit, said.

This is not the first time Alden Library has bridged the geological gap between continents.

Since the 1950s, Alden Library has collaborated with several African nations including Botswana and Swaziland, through which Alden serves as an official book depository, or a place for safekeeping, of these countries, Dawson-Andoh said.

For Intrator and Dawson-Andoh, the genesis of this particular exhibit came about with the intention of displaying Alden’s varied Africana collection for members of the International Federation of Library Associations and Institutions, who recently held its annual conference in Columbus this month.

Intrator said Dawson-Andoh and herself searched through a cart full of texts from the archives and rare book collection before deciding on the pieces and to what pages they would be open.

After the two narrowed the featured works, Miriam Nelson, Alden’s head preservation librarian, examined the condition of the pieces and prepared them for extended display with custom book cradles and supports.

“We make most of our book cradles at the preservation department and fit them to each book based on the size and which page it will be open to,” said Nelson. “I really enjoy seeing exhibits come together. I’m always pleased to be a part of that.”

Dawson-Andoh said she hoped the exhibit would bring awareness to Africa’s history and pass knowledge on to students.

“Africa In History” will remain open to students and the public until Sept. 15.

IF YOU GO (Graphic)

What: “Africa in History”