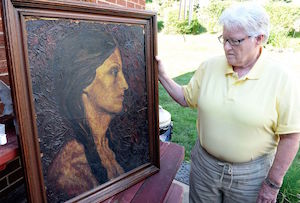 By Luke Furman for The Beaver County Times

ALIQUIPPA — Alice Kirby never thought she would reunite with a particular painting her father created early in his life.

At 19 years old, Charles Williams, Kirby’s father, painted a portrait of Queen Aliquippa on a noncanvas pressboard and donated it to Aliquippa High School, his alma mater, in 1933.

The swirling painting depicts the eponymous Native American woman from the 18th century, who led a Seneca tribe in western Pennsylvania. Significant enough to have George Washington seek her company, Queen Aliquippa now primarily lives on through the town to which she gave her name.

Williams’ “Queen Aliquippa” remained on display in the school building’s entrance for the next 76 years.

During the painting’s extended exhibition, Williams worked at the Barnes Foundation in Philadelphia, an art institution, during the Great Depression before returning to western Pennsylvania to work at J&L Steel Corp. as a roll grinder.

However, despite taking on a trade to support his family, he valued art and painting above all else, Kirby said.

Along with “Queen Aliquippa,” Williams created paintings of his daughter, his wife, also named Alice, and his father-in-law using charcoal, landscapes and still lifes. He partook in plein air, or outdoor, painting in scenic local spots, as well.

Williams died in 1972, with his paintings and sculptures going to his son and Kirby’s brother, Bill Williams, in Spokane, Wash.

Alice Kirby and her friend Rose John, whom she now travels here to visit from Atlanta, grew up in Center Township and attended Aliquippa High in the early 1960s, when they experienced the painting of the Native American leader firsthand each morning.

“As you walked in the main entrance, you could see it hanging on the wall. You were so used to seeing it that you almost didn’t notice it,” Kirby said.

Recently, Kirby traveled back to Pennsylvania and wanted to see if she could buy the painting from the school. She contacted the junior and high school building secretary, Kathleen Dulaney, to try to make an offer.

“She was trying to get a hold of it for years,” John said. “We didn’t know where it was.”

After the district razed the old high school building in 2009, it kept the painting in a storage room for eight years, Dulaney said. But after some searching, the painting resurfaced.

“She called up asking for the picture,” Dulaney said. “I asked the superintendent if she could buy it, and he said we could just donate it to her.”

After nearly 30 years of perseverance, Kirby finally gained ownership of her father’s painting from Aliquippa Principal Alvin B. Gipson on Tuesday.

“They were kind enough to donate it to us,” Kirby said. “Instead of throwing it away, they stored the picture for eight years, which is unusual since it was in bad shape. It’s really something.”

John, who will ship the painting to Georgia for Kirby, said it is in decent condition but is “rough around the edges with a couple of cracks.” Kirby said she plans to have it restored to recapture its former effect.

“I never thought I would get that painting back in my wildest dreams,” Kirby said. “I have a lot of paintings but none mean as much as this particular painting. It was my father’s past, and I just feel elated.”

In addition to Williams’ past, Kirby said the painting captures the cultural significance of its namesake town.

“To me, it resembles Aliquippa itself,” Kirby said. “It was the (school’s) mascot, and everybody knew the painting. It makes me proud, and it was a wonderful feeling to be given it.”

Shortly after the donation, “Queen Aliquippa” even drew immediate recognition from a former Aliquippa teacher.

“When I took the painting (to John’s house), (Rose LaSala), who was a music teacher at Aliquippa, came in and said, ‘That’s Queen Aliquippa. How’d you get that here?’” Kirby said.

Kirby said she plans to give the painting to her son, Chucky, so that it can pass down through a third and eventually a fourth generation in her family.