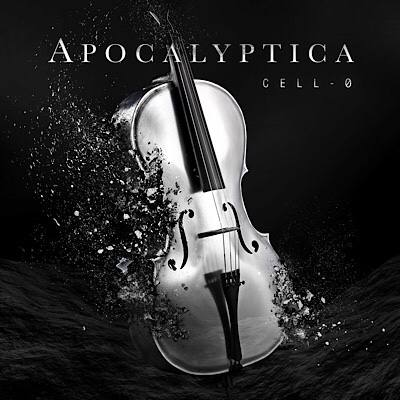 Starting with its first LP in 1996, Plays Metallica by Four Cellos, the Finnish band Apocalyptica has spent its career reimagining metal music from a neoclassical standpoint, a perspective responsible for the group’s one-of-kind sound. Now, nearly a quarter century removed from its initial Metallica tribute, the band’s latest effort, Cell-0, marks a notable return to origins for the quartet, which consists of three unconventional cellists and a heavy metal drummer.

For most of Apocalyptica’s decades-long run, the band has collaborated with guest vocalists and released accessible singles that you might have heard on your local alt rock radio station. But on Cell-0, the band throws those qualities out the window, unearthing its symphonic, purely instrumental side in favor of garnering U.S. and European radio play. And rather than feeling like a fan service or a stylistic regression, the album delivers 52 minutes of original material composed of movements exploring colossal themes such as universal origins, elemental forces and deep space mysteries.

In addition to those themes, Cell-0 also features songs that evoke apocalyptic and post-apocalyptic landscapes, living up to the band’s Armageddon-conjuring name. The album’s six and a half minute opener, “Ashes of the Modern World,” introduces Apocalytica’s instrumental renaissance with an immediate assault of rapturous drums accompanied by looming, ethereal cello lines that call to mind air raid sirens. Halfway through song, the buildup gives way to heavy, chugging riffs before closing out with an orchestral explosion that does justice to what’s in store for us if the end times do come.

The track also introduces the album’s masterful mix by Andrew Scheps, whose résumé includes Red Hot Chili Peppers’ Stadium Arcadium and Adele’s 21. Finding room for three overlapping cellos in a mix presents a major challenge, but under Scheps’ supervision, the album’s production feels clean, balanced and complementary to the musicianship. There are enough different textures here, both acoustic and electric, to keep the listener engaged throughout the album’s nine tracks, and you really can’t ask for a mix that better serves these dynamic compositions.

And if “Ashes of the Modern World” soundtracks impending doom, then Cell-0’s more hopeful-sounding songs such as “Rise” and “Catharsis” chronicle a world rebuilding out of the rubble. Both tracks are more concerned with beauty than brutality, providing a break from the heaviness flanking them. The former employs a muted drumming pattern and layers of savory cello that wouldn’t sound out of place at an opera house. “Catharsis,” on the other hand, leans a bit further into a meditative black metal feel. But, with only a few overtly metal flourishes in either track, both offer traditional, classically-inspired structures with expressive bowing that glides rather than shreds.

However, if you recall, Cell-0 is foremost a metal album, and the nearly 10-minute title track delivers the goods in that regard, utilizing many brooding passages and extreme emotions that range from intense chaos to quiet anticipation. After an opening that resembles Tool’s “Fear Inoculum,” warped cellos riff over pounding drums with playing that’s so in sync that it could pass for technical death metal. The song’s direction spins into frenetic solos, collective chugging, atmospheric plucking and closes in a symphonic frenzy, leaving behind a stray cello that trails off into the ether. In a press release, the band said that Cell-0 represents its fascination with how life is formed particle by particle in a similar way that music is formed note by note. With excellent musical voicing that sounds like it’s attempting to decipher The Big Bang, “Cell-0” fittingly acts as a microcosm for all of the album’s songs almost like a heavy metal overture.

But, while the length of the title track invites listeners to become immersed in it, other songs on this LP tend to wrap up too quickly, preventing them from becoming fully realized. The black metal speed of “En Route to Mayhem” initially blasts the listener with furious aggression, but unfortunately, the band allows the song to fizzle out with reverberated drum rolls before anything transcendent can take place. “Fire & Ice,” clocking in at five minutes and 21 seconds, also suffers from the same problem. Using baroque chord progressions and woodwind-like textures, the song shows great potential as a musical display of elemental forces, but it doesn’t manage to live up to its powerful name. Had “Fire & Ice” been combined with the next song, “Scream for the Silent,” the former’s title would have been much more suitable.

This is not to say the shorter tracks on Cell-0 are all unrealized. The shortest song, “Call My Name” actually feels complete despite its length because, unlike the other songs, it only uses one main progression throughout its runtime of just under four minutes, and it keeps becoming more layered with the addition of every new cello line. If “En Route to Mayhem” and “Fire & Ice” were not as complex in structure, and explored each part longer, they might allow the listener to get lost in the moment, which by many standards, is the mark of successful instrumental music.

For instance, the closing track, “Beyond The Stars,” succeeds in drawing listeners into its world and keeping him or her from pulling away. So, it’s not like Apocalyptica is incapable of fleshing out these compositions. “Beyond The Stars” delves into each musical section long enough to keep the seven minutes engaging, driven by a lead cello that sounds distraught but somehow optimistic. And during the song’s swirling, forceful finalé, the band reveals a surprise vocal sample of deep-voiced man delivering a short monologue. His voice is buried under dense instruments but some phrases such as, “Through the ashes of the modern world…cell by cell, the balance of the earth is restored” and “to our own destruction…humans go beyond the stars” can be made out. The well-placed sample nicely wraps up the album’s themes, even if it’s only partially comprehensible, and rewards the listener with an Easter egg of sorts.

Putting choppy song-length aside, Cell-0 is a record that creates an atmosphere full of both beauty and wickedness. Stellar production, a mix of textures and variation between metal and classical styles prevent Apocalyptica’s playing from ever growing stale. Listening to this album is like staring up at the stars for an extended period of time, leading the mind to ponder unanswerable questions and consider the infinite factors that brought humanity to its current state of existence. For a band that employs such an audacious musical arrangement, Apocalyptica justifies its ambition with equally audacious songwriting and thematic concepts. Cell-0 is the band’s most monumental statement to date.