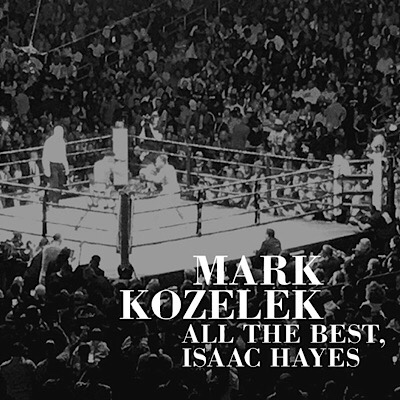 Early on his new album, singer-songwriter Mark Kozelek mentions he’s reading Henry Miller’s novel Black Spring and says, “I may be a hundred pages into it so far and it’s like reading a long dream.” That lyric from the song “Vancouver” can also sum up All The Best, Isaac Hayes, Kozelek’s latest travelogue written during his 2019 tour of Canada and the East Coast.

But, where his former tour diary album, 2018’s This Is My Dinner, felt thoughtfully edited and concise, Isaac Hayes often devolves into sections of uninteresting events and pointless details throughout its exhausting hour and a half runtime, which I guess has become the standard length for Kozelek’s releases.

For the majority of this record, Kozelek recounts anecdotes about touring Canadian cities. The songs “Vancouver,” “Calgary,” “Ottawa” and “Winnipeg” form a kind of narrative suite set in the Great White North. While the guitar-laden “Vancouver” and bassy “Calgary” consist of the usual Kozelek tropes such as encountering strangers, revisiting memories and growing older, the song “Ottawa” stands out among the others because it finds Kozelek once again ruminating on his feud with The War On Drugs, which had begun at an Ottawa music festival in 2014. It’s a topic he’s addressed more than once before and its relevance has worn more thin.

Winnipeg appears to be his favorite of these cities because it reminds him of the cultural diversity of San Francisco. With Gia Margaret providing the unobtrusive piano music to the track, “Winnipeg” comes closest to the excitement of This Is My Dinner with Kozelek sounding energetic and determined to succeed, telling his hecklers to count their blessings. The song also features one of Kozelek’s funniest anecdotes where he states his drug of choice is unsweetened iced tea.

Speaking of San Francisco, it’s also the name of the opening track and where the album was recorded. Driven by a rich piano progression, the song “San Francisco” unfolds over the course of a day prior to his tour starting. A rich piano plays as Mark recalls seeing a struggling seagull, being mirrored by a British tourist and trying to be more eco friendly in a way that’s reminiscent of one of his previous songs called “Cows.” As one of the album’s shorter songs at roughly eight minutes, “San Francisco,” opens the album in an intriguing way and carries the power of Kozelek’s attachment to his adopted hometown.

Two songs in the middle of Isaac Hayes chronicle the final East Coast leg of Kozelek’s tour. The singer’s affinity for wordiness spills into the title of “Buffalo Valley Rest Area Smith County Welcome Center,” an often humorous track that contrasts the southern cities of Nashville and Asheville before sharing some Sun Kil Moon trivia and then ending on a bitter note. Chris Connolly’s warm, ascending guitar gives “Buffalo” one of the best instrumentals on the record.

And, while the majority of the album is delivered in a spoken word delivery, the other East Coast song, “Highway 81,” sees Mark singing a few lines here and there. On the unremarkable song, he and his band take Highway 81 from Asheville to Sellersville, PA, stopping only to buy antique gifts and eat fast food. It’s a short look at interstate exit culture and rounds out the final dates of his 2019 tour.

Following “Highway 81” comes this middling album’s saving grace, the 22 minute, well-crafted narrative, “Los Angeles.” Petra Haden, who collaborated with Kozelek on last year’s Joey Always Smiled, makes a funny cameo on this song as a person who’s had too much to drink on a flight. Over hypnotic piano melodies and a warm bass that gives the song a bounce, Kozelek’s lyrics recount when he and his girlfriend, Caroline, attended a boxing match between Errol Spence Jr. and Shawn Porter on September 28 at the Staples Center. Despite his constant complaining about growing old and being achy throughout Isaac Hayes, he experiences childlike glee at the song’s climax when, after getting past waves of stadium security, he meets Youngstown boxer Ray “Boom Boom” Mancini ringside. “I just met Boom Boom/I just met Boom Boom,” he exclaims to the listener.

The song later explains the album’s name when Kozelek recalls once meeting Shaft-composer Isaac Hayes and asking him to sign his guitar case, to which he wrote, “All The Best, Isaac Hayes.” Also, this centerpiece’s final piano melody might get stuck in your head and it’s one of the album’s top musical moments.

Listening to All The Best, Isaac Hayes is like listening to Kozelek read an audiobook of his journal while continuously plugging his upcoming pay phone photobook. Although there are creative moments such as Mark’s beeping noises on “Ottawa” and Haden’s guest spot, the album too often gets bogged down by tedious minutiae and never quite captures the excitement of a travelogue. While Kozelek might be a master journaler, his unfiltered lyrics on this album could use some refinement and editing. Ultimately, fans of Kozelek will appreciate hearing about another chapter in his life, but compared to the far superior This Is My Dinner release and his wider discography, All The Best, Isaac Hayes feels inessential.