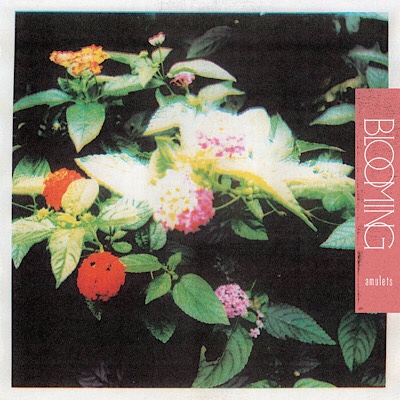 Photo Courtesy of The Flenser

By the time Randall Taylor, who records under the name Amulets, reveals a whispered voice speaking on “Whirl,” the closing song of his new album Blooming, a full sonic narrative focused on the cyclical nature of life has already unfolded without a single lyric being sung.

An audio/visual artist based out of Portland, Taylor fills his Flenser debut with reverb-soaked guitar melodies and distorted production techniques to build up compositions that channel the natural forces that are quietly at work around us everyday such as rebirth, growth and human adaptability.

With its well-balanced sound design that includes field recordings opening and closing the LP, Blooming immerses listeners in detailed layers of instruments and carefully crafted textures of noise.

The title track sleepily opens the record with birds calmly chirping just before a storm of overdrive and aggression command the atmosphere. And as if that’s not enough, the dense opener’s intensity is only built upon, and ultimately upstaged, by the following track: the album’s chiming lead single, “The New Normal.”

Likely a reference to our current pandemic, “The New Normal” is a dark, brooding piece that sonically resembles someone tinkering around in a garage while wind and rain crash outside its grimy window. But, with the end of COVID-19 seemingly in sight, the song closes with hopeful string swells and stereorized violin-like pulses. The five-minute track’s endlessly flowing movements and varied textures make “The New Normal” one of the key songs on Blooming.

The next two tracks, “Heaviest Wait” and “Observer Effect,” see Taylor display his intricate guitar playing and airy fingerpicked melodies. Taylor’s sparse and gentle plucks meander in the backgrounds of the majority of the songs, but these pieces feature it as a crucial element.

Taylor’s leads also occasionally steals the spotlight, rising to the surface of the mix. For instance, the use of a flashy backmasking effect on the late-album powerhouse track, “Collapse in Memory,” stands out as one of the most direct live playing found on the record.

In addition to inventive guitar effects, the eight minutes that make up “Collapse in Memory” include the crescendo moment for the album’s big sonic themes of renewal. The song’s evolving atmosphere and slowcore guitar lines carry the most emotional weight found throughout the LP’s 43-minute runtime.

Although less-impressive tracks on Blooming such as “Tears in the Fabric” and “Empty Tribute” pad out the release rather than add anything new, every song on Amulets’ new album compels listeners to escape into their own worlds of thought. And despite brief moments that dull from the extended meditation, the refined clarity of purpose and subtlety of these compositions on Blooming as a whole, make for a serene but intense first listen.

Amulets’ Blooming acts as the perfect soundtrack for the aftermath of a stressful day at work or for preparing your brain to enter sleep mode before bed. Even though you might be too tired to keep your eyes open, Blooming will make you feel like you’re covering miles and miles of terrestrial space: the telltale sign of an exemplary ambient work.